After Mary Hartwell's death in 1833, Leomansley Mill was bought by Thomas Adie (or Adey). At this stage the mill was still water driven and used for spinning hosiery and knitting yarn. The building had been enlarged and was now four storeys high. Adie however, went about adding a high pressure steam engine and so converting the power source away from water and onto steam. The ponds that still exist by the track leading to Leomansley house the house may have been dug at this time or earlier, when Mary Hartwell was still the owner. There is a delightful image of the Mill produce probably in the 1840s, which depicts a substantial mill building with outbuildings and a chimney billowing smoke. “in the early days of Queen Victoria's reign (presumably 1840s), a large and busy mill employing over 100 hands stood here”. 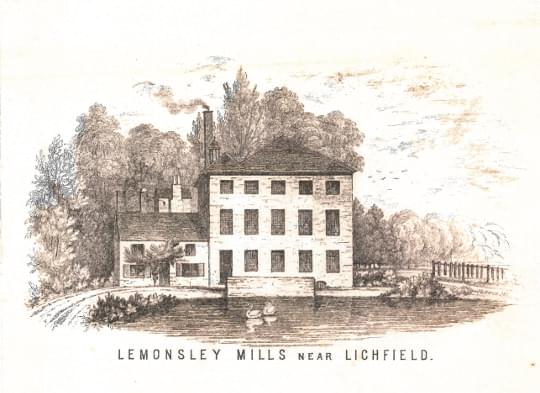 Adie did not run the mill himself, but leased it first to Daniel Green and later to James Johnson, who both produced excellent quality worsted knitting yarn. James Johnson also owned a wool shop in Market Street and according to a retrospective article in 1938 in the Lichfield Mercury “the mill had a very high reputation for the quality of its worsted, which was sent to all parts of the kingdom”.

The conversion of the mill to steam power had a huge consequence for the Pipe Green Trust, as Adie was now no longer dependent on the mill pond for power. In fact not only did Adie stop paying the Trust the annual rent of £3 3s, he also claimed the millpond to be part of his own estate! This incensed the Trust and there followed a very acrimonious and drawn out legal battle between the Trust and Adie over the millpond. Whilst the Trust served notice on Adie in 1840, it was only in 1847 that the matter was finally resolved. We are lucky that the papers surrounding this case are in the record office and they not only give us a fascinating insight into the case, but also the people involved and what they were doing.

The Trust's representative was a Mr Hodson from the solicitors Hinckley Burns Exham who did a lot of work on getting witness statements and sorting out the boundaries of the Green. To say that Adie dragged his feet is an understatement and it was only in 1846, when a Mr John Bright from Teddessley Bank was appointed as an arbitrator did things started to move. A meeting between the Trust and Adie was arranged for 15 September 1846, at the Swan hotel. The Trust had organised witnesses to describe where the boundary of the Green used to be and evidence that the land the millpond was on did indeed belong to the Trust. However, Mr Adie's representative (a Mr Bond) refused to enter into any conversation at the meeting and so it was deferred until the 28th Sept, again at the Swan Hotel. In the meantime a member of the Trust travelled to Worcestershire (where Adie lived) to serve notice on him. This did not do much good as at the meeting on the 28th neither Adie nor any of his representatives attended! Mr Bright however, did hear the evidence provided by the Trust.

In 1847 Mr Bright finally gave his full arbitration, which was that the millpond did indeed belong to the Trust and that Adie was to restore it to the Trust for cultivation. He was also ordered to pay £8 15s compensation. So all seemed to be going the Trust's way, but there was a fly in the ointment, as at the beginning of this dispute, both parties had declared to each pay for their own expenses, which in hindsight was a big mistake. Due to Adie wasting time and drawing things out, the Trust's bill to the solicitor had risen to £120 and whilst they had paid some of it, they could not afford to pay the full amount. If they had not had this statement, then Adie would most likely have been ordered to pay the Trust's expenses and the Trust would still own the land outside the front door of Leomansley House! What happened next is still a bit of a mystery and there isn't anything in the accounts to shed light on the matter. Given that the 1860 map of Leomansley Mill shows the millpond as being part of Mill's estate (and not part of Pipe Green) it is likely that Adie paid the outstanding solictor's fees at the expense of retaining the millpond. So in that respect he won the case!

1860 map of Leomansley Mill. For a better view, those with a larger screen can “zoom” the image for a closer look.