Livestock grazing was an important source of revenue for the Trust as approximately three quarters of the Trusts' annual income was generated from this activity (approximately £20.00 out of a total of £25.00). We are lucky that the account books list each year how many cattle were being grazed and by whom. This allows us to build up a picture of not only how the Green was being managed but also who was living on Beacon Street at that time. 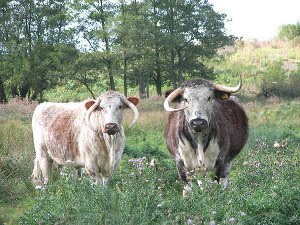 For the first sixteen years of the Trust (1794 - 1810) Trust members could only graze a maximum of two head of cattle at a cost of 3s 6d per head. Suprisingly, on average, 30 head of cattle were grazed each year from May through to the following February i.e a total of 9 months and over the winter (today we only graze 15 head of cattle from May through to October). The cattle most likely were hardier than today's breeds. Infact longhorn cattle – see photo opposite1 – were a very popular breed in the early 19th century and may well have been a frequent sight on the Green.

In 1810, in addition to the cattle, horses start to be grazed on the Green at a price of 7s 6d per horse. The accounts record that between 6 and 10 horses were grazed annually. Horses do graze differently to cattle and probably were only turned out in the evening after a day's work. One regular subscriber is Dr Trevor Jones, who grazed his horse for 20 years on the Green. He was a physcian in Lichfield and took over Erasmus Darwin's practise when he retired (more about Dr Jones later!).

Sheep were also allowed to graze on the Green in 1818 between December 1st and 1st February, at a cost of 4s. However this was only done for two years as presumably it was not viable and damaged to Green too much. It is also recorded that in 1816 a farmer was allowed to put his bull on the green - now that could have been interesting!

One entry in the accounts book that makes me smile was in 1817, Mr Dodson (more on him later) paid £1 1s for playing cricket on the Green! I am not sure how flat the wicket would have been or what the cattle thought of this. I suspect it was not that successful as it only happened for that year and maybe Mr Dodson found a more suitable alternative! Maybe the image below gives us a feel of what it might have looked like. 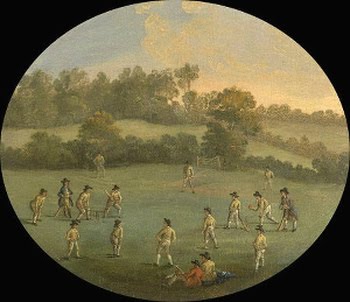 A game of cricket in the late eighteen century2

The accounts give an indication of some of the work undertaken on the Green and how much was being paid. Unfortunately, whilst the number of days worked is accurately recorded, quite often the accounts do not state what was being done - very frustrating!

Men were paid 1s 6d per day in 1794 but this increased to 2s in 1800 and further to 2s 6d in 1802. Of course ale was also included. These wages were in keeping with agricultural wages in Staffordshire (1) and reflect the high inflation as a result of the Napoleonic wars. The amount of work done on the Green does vary from year to year - sometimes as little as 20 days work, whilst other times it is more than 100 days (2, 3, 4). 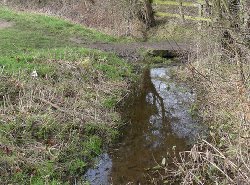 A lot of effort went into draining the Green. Anyone who knows Pipe Green, will know that part of the land is very wet and boggy and require a stout pair of wellies to venture onto. Drainage was done in two ways - firstly by digging drainage ditches. These ditches survive today and can be found on most of the perimeter of the Green, although they are a lot more silted up than they would have been. In 1805 John Deakin cleared 25 rood of ditches (at 6d per rood) followed by 210 rood (at 3d per rood). This equates to clearing 1410m of ditches and probably involved clearing most of the perimeter ditch. I bet he had a sore back at the end of that!

Secondly, during this period, the Green was also drained by the use of soughing or drainage tiles (soughing tiles had a flat tile forming the floor of the drain and an arched tile placed on top - probably similar to the top image opposite3). These clay tiles were becoming increasingly popular (and much cheaper) in the early 19th century. In 1813, 4 members of the Trust loaned £20.00 (£5.00 each) to improve the drainage (soughing). It is not stated how many tiles were bought, but a later entry shows 40 tiles cost 2s 6d. So, £20 would have bought approximately 8000 tiles, so even if £10 was spent on tiles, there would still have been 4000 to lay! This is reflected in over 100 man days being paid for in 1813 - presumably laying the tiles. An article in the farmers magazine of 1842 gives an interesting description of how to drain land with soughing tiles. Seemingly 2293 tiles drain one acre of land, so the trust must have been draining 2 - 4 acres of land - I wonder if any are still there?

There is some evidence that a moderate amount of improvemnt to the land was undertaken. There are references to "seeds" being purchased but it is not described if it was grass seed or other plants e.g. clover, trefoil, which were popular in the 19th century. There are a couple of references to bringing in fertiliser in the form of manure and in 1822 £1.19s was paid for "ashes from the hospital" plus £1 7s for "carriage of ashes" This would have been the ash from the wood burning fires (not human remains!) and would have contained a source of potash.

The first reference to mole catching is in 1797, when John Asbury (a member of the Trust) was paid 2s catch moles on the Green. There are then further entries in 1823, 1825 and 1831 for a mole catcher (this time paid 2s 6d!). How many moles were caught is not described, but jumping ahead nearly 160 years, in 1969 104 moles (and 1 weasel) were caught on the Green. Today, we prefer to leave the moles in peace and judging by the number of mole hills around, they seem to be doing quite well!