A small fern that does not look like a fern and is quite difficult to find, as it is so well camouflaged. It starts to appear in April/May and is identified by a green frond, that looks like a leaf, and a tall spike, which contains the spores (remember it is a fern)! As it matures, the spike resembles an adder's tongue and so hence the name. It is a good indicator species of undisturbed and ancient meadowland and is rare in Staffordshire. We are very fortunate that we have a couple of areas on the Abnalls Lane end of the Green where it can be found. 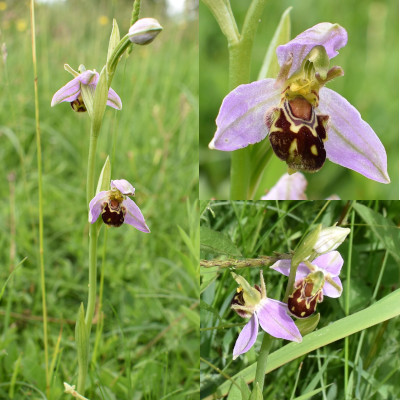 We are lucky that most years we have some bee orchids flowering on the Green. They are usually on the Abnalls Lane end, although they do tend to move about. You would think that they would be very easy to find, given their brightly coloured flowers. However, that is far from the case and they seem to be able to merge in with the surrounding grasses, making them difficult to find! The flower has evolved to attract pollinating bees, but unfortunately these bees do not live in the UK, so the orchid relies on self pollination.

In June, the Green turns to a carpet of yellow due to the buttercup flowering. There are in fact, three types of buttercup that grow on the Green; meadow, bulbous and creeping. Of these, the meadow and bulbous buttercup grow on the drier part of the Green, but the creeping buttercup is usually found where the soil is much damper. They can be distinguished from each other by the shape of their leaves and the arrangement of the sepals beneath the flower. Suprisingly, they have quite an acrid taste and are not a favourite food for cattle, but they seem to be tolerated when grown with grasses.

This common plant is also known as “eggs and bacon” due to the yellow and orange colour of its pea-like flowers. The bird’s-foot refers to the claw-like seed pods that develop after flowering (although it can also be called “granny’s toenails”, which conjures up a less palatable image!) It grows over quite a large part of the Green and flowers between May and September. It is an important nectar source for bees, wasps and butterflies as well as a food source for insect larvae. 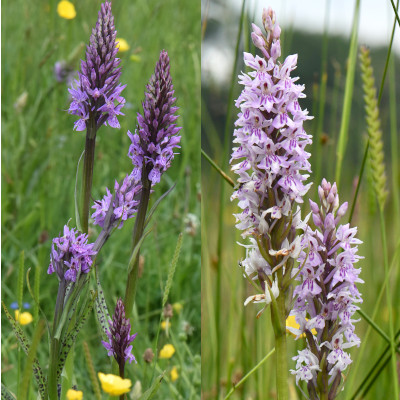 As the name suggests, this is one of the most widespread of British orchids and we usually have quite a good display (unless the cattle eat the flowers!). I always used to think that the “spotted” referred to the spots that are usually found on the leaves, but I have since been told, by a reputable source, that it is due to the spots on the flowers. These orchids can vary in colour from dark purple to pale pink and they can be very difficult to distinguish from some of the other orchids, especially if they hybridise! The shape of the petals are key in identification, with the bottom three petals of the flower being quite pointed (compared to the southern marsh orchid, which has much rounder flower petals).

This is one of the easier grasses to identify, and is widespread on the drier side of the Green. It is an excellent meadow grass, as it does not grow that vigorously and so allows other wildflower species to grow and spread. It is also a food plant for a number of butterflies. It is quite a stiff, compact grass, and interestingly its stems were used in the past for weaving and making bonnets. It flowers in June and if you look closely, you can see the beautiful purple anthers dangling about in the breeze!

Germander speedwell is one of the most common speedwells and it grows in profusion on the Green. It can be distinguished from other speedwells by having large toothed leaves. The bright blue flowers can easily be seen amongst the buttercup and pignut in June. The flowers can vary in colour from sky blue to pale violet, but they always have a white central eye. It is a nectar source for solitary bees.

Lady’s bedstraw has minute bright yellow flowers, which are densely clustered and give the flower head a frothy appearance (similar to meadowsweet). It flowers in July/August and can grow up to 30cm tall. The flowers are sweet smelling and have been used for centuries as a stuffing for mattresses and the scent is supposed to help ease childbirth. The flowers can also be used to make cheese, as they are able to curdle milk and the roots can be used to make a red dye. All in all, a very versatile plant! 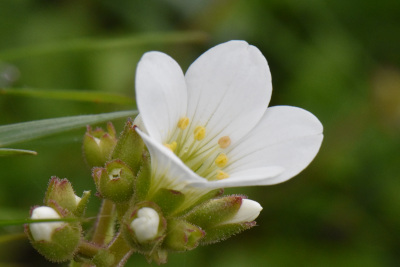 We are very lucky to have some meadow saxifrage growing on the Green, as it is a species that is in decline nationwide, mainly due to the disappearance of old grasslands. It has beautiful clusters of white, star-shaped flowers and is a nectar and pollen source for bees.

Meadow vetchling grows in profusion on some parts of the Green. At a first glance, it may be confused with Greater bird's-foot trefoil, having bright yellow flowers and belonging to the same pea family. However, the leaves are very different, being spear-like and occurring in pairs. As with all members of the pea and clover family, it is able to fix nitrogen into the soil.

The Pignut is a member of the carrot family and is a good indicator species of undisturbed meadowland. Its delicate white flowers transforms part of the Green into a white carpet, when it flowers in early summer. It has an edible tuberous root, which is a favorite food of pigs - hence the name!

This low growing plant grows particularly well on certain parts of the Green and it has delightful purple flowers, which give the grassland a purplish glow when it flowers in June. The solitary bees can often be seen feeding on it as well as some butterflies and other insects. It has also long been used in herbal medicine for a whole range of conditions (hence its name) from wound healing to treating sore throats. So, quite a versatile plant!

This is one of the 16 grasses that grows on the Green and is fairly widespread on the drier side. It flowers in May and has a short yellowish-green head and one of its main characteristics is that it has a sweet hay smell (although some say it smells of vanilla!) and is quite sweet if chewed. It is also an important foodsource for the caterpillars of the meadow brown and skipper butterflies. However, it might also make you sneeze and your eyes water, if you suffer from hay fever, as its pollen is quite allergenic! 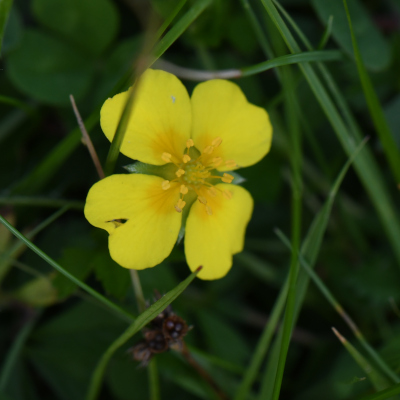 Tormentil grows widely across the Green and is easy to identify as the yellow flowers only contain four petals. It is a useful nectar source for solitary bees. The root is widely used by herbalists and, as recommended by Culpepper, can been used as a treatment for diarrhoea, as well as to stop bleeding. 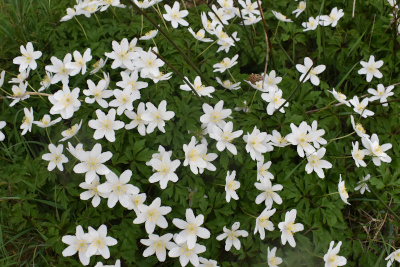 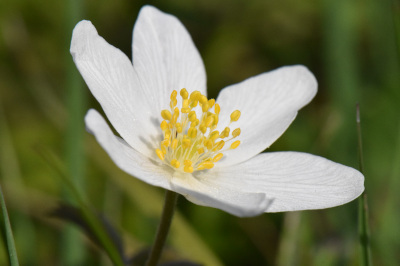 Wood anemone, also known as “wind flower”. Whilst it is normally a woodland plant, there are some patches of this plant growing on the Green. It is one of the first flowers of Spring and is a joy to see! It has beautiful white, star-shaped flowers, which I always want to photograph! The seeds are mostly infertile and so it spreads slowly through root growth, which means it is a good indicator species of undisturbed meadowland or ancient woodland.

© Pipe Green Trust — unless stated otherwise, the Creative Commons Attribution-ShareAlike license (CC BY-SA 4.0) applies to the content on our website.