One of the first documents that the Trust owns is an agreement written in 1791 between the inhabitants of Bacon (Beacon) Street and John Hartwell, who had recently acquired land adjacent to the south western boundary of Pipe Green, on which he intended to build a fulling mill. However, he needed a little more land to build a mill pond and so entered into an agreement to rent 2 roods of land (approximately half an acre) from Pipe Green. In return Hartwell would pay 10s a year to the curate of St Chads, the Rev. Edward Remington, and the monies would be distributed each year on the 25th of December, as bread to the poor of Bacon Street. A full transcript of the original agreement can be found as a PDF file at the bottom of the page (be warned it is not the easiest document to read and I have split it into more manageable sections and added a summary above each paragraph in bold). For those that want more, I have also added a section "A closer look at the 1791 agreement" near the bottom of this page. Accompanying the written agreement, is a map (drawn in 1791), which holds an amazing amount of information and certainly makes the site more understandable. Not only does it show the mill and mill pond but also the route of Leomansley brook across Pipe Green. A scan of the original map can also be found at the bottom of the page (250kb).

What is fascinating, is what happens when you super-impose the 1791 map onto a present day Google earth map (a rather fiddley process, when you do not have any grid coordinates on the original map!). This is shown in the map below, with the mill pond in blue. The red line depicts Hartwell's land and the area between the red and yellow lines, is the 2 roods of land rented from Pipe Green. It can clearly be seen that this land forms a large part of the mill pond. Anyone who knows the site today, will probably realise that the yellow line is the present day boundary of the Green. How that came about is another story told later on! 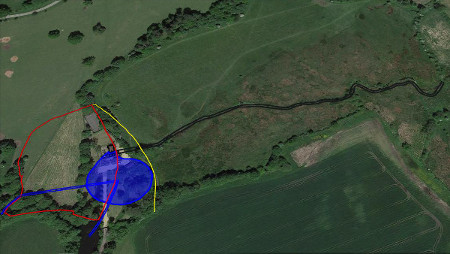 Enlarging the mill section of the 1791 map (seen below) gives us an idea of the size of the mill and millpond. The mill itself was quite small (building 1) and stood next to a larger building called house (building 2). The mill pond extended up to these buildings and looks as though the waterwheel was located between building 1 and 2. The mill was likely to have had a breast shot waterwheel, as this is listed in a sales advertisement in 1860. The mill pond was a substantial size (estimated to be 70 m diameter). Interestingly there are two watercourses feeding into the mill pond; one is called "Mapple Hay Brook" and the other, "Lemmons-lay Brook" (seen on 1791 pdf). The Mapple Hay Brook is the stream coming from the present day Jubilee Woods across the Maple Hayes estate (but which today is referred to as Leamonsley brook). Lemmons-lay brook, on the other hand, appears to be the water course coming in from the present day Sloppy woods (seems to be a more logical naming system in 1791!) . It also suggests, from the Google earth image, that the Mapple Hay brook was diverted from its natural course, to feed into the mill pond. How the mill was accessed is not known, as no road or track to the mill is shown on the map. 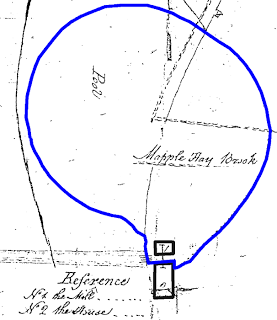 Unfortunately John Hartwell died in 1798 and his widow, Mary Hartwell, took over the business. In 1810 the Pipe Green Trust served notice on Mary to surrender the land owned by the Trust. As this was now part of the millpond and obviously an important piece of land (a mill is hardly going to work without a millpond!), it put Mary in a very difficult position. She did however, renegotiate the lease and a new lease was signed in 1812. However Mary now had to pay an annual rent of £3. 3s, which is substantially more than the 10s she had previously been paying! Mary agreed the terms (I suspect reluctantly, but then the Trust did have her over the proverbial barrel) and paid the rent annually. Mary did not run the mill herself, but leased it to initially John Henrickson and later Thomas Dicken. During this time the mill underwent a major expansion, becoming an impressive four-storied building (more about this later). It maybe that the expansion was too costly as John Henrikson went bankrupt in 1815. Mary died in 1833 and the mill was bought by Thomas Adie in 1833.

The 1791 map, not only gives an indication of the site of the mill, but it also raises some interesting points and of course, unanswered questions.

A closer look at the 1791 agreement

The written agreement that accompanies the map, is a somewhat long winded and convoluted document with very little punctuation and a lot of legal speak! The agreement has been fully transcribed as a pdf document. I have taken the liberty to break the document into more manageable sections, with a summary of each paragraph in bold. Some interesting details can be found in this document and have been highlighted in blue: