Birds you may see on Pipe Green

Birds you may see on Pipe Green

Buzzard numbers have increased over the last 10 years and you may even be lucky to see 5 or 6 flying over the Green at one time! They have a distinctive mewing call and are easily recognisable from their shape and wing pattern, when flying. You may also spot them sitting on the telegraph poles.

Listen to a buzzard call on the RSPB website.

This brightly coloured finch can often be seen in the hedges, as well as on the silver birch and alder trees, surrounding the Green. They usually are found in small groups and make a lovely light twittering noise. They love to feed on the seed heads of the Marsh Thistle.

This bird is a red-listed species, but we are very lucky to have had a breeding pair on the Green since 2019. It is a summer visitor and has a very distinctive reeling call that does sound like a grasshopper! They are very difficult to see, as they skulk around amongst the rushes and bramble on the wetter side of the Green. So keep an ear out for something that sounds like a grasshopper, but isn't!

Quite a difficult bird to see, but the male can be heard in the spring, drumming on the trees, in an attempt to attract a mate. They nest in holes on some of the dead trees surrounding the Green.

Listen to a Great spotted woodpecker drumming on the RSPB website. 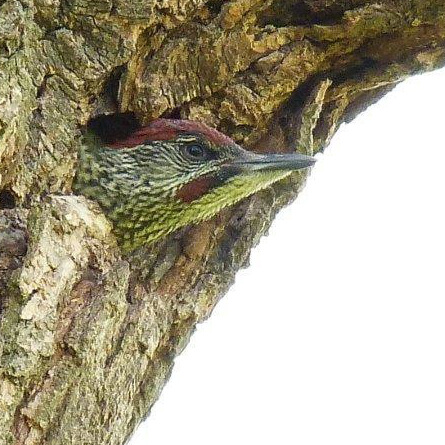 This bird is usually easier to hear rather than see! It has a very distinctive “yaffle”, call, which it makes when disturbed. It loves to eat ants and if you are lucky, can be seen feeding on the dry areas of the Green.

They frequent the wetter parts of the Green and can usually be seen early morning hunting in the stream and amongst the rushes. They will fly off when disturbed. They most likely roost at the heronry at Aldershawe and will fly across to the Green to feed.

A smaller member of the crow family which can regularly be seen feeding on the Green, especially looking for insects on the cow pats. They roost and breed in the trees near the Abnall's Lane entrance and can always be heard making their characteristic “chack” call.

Used to be a regular visitor to the Green, but sightings have dropped over the last 10 years. This may be a due to a decrease in vole numbers (their favourite food) as the land has become much wetter. Nevertheless, kestrels are still in the area and you maybe lucky to see one hovering over the Green, or perching on a tree branch looking for its next meal!

You may be lucky to see one of these gorgeous birds in the Autumn, which are often juveniles looking for new territories. They can be seen by the stream (often on the water pipe) and on Leomansley House fishing ponds, although more often it is just a flash of blue, as they fly off!

A very small, gregarious bird that is usually seen in a flock of up to 20 individuals. Can often be seen in the hedges surrounding the Green, as well as in the lane leading to Leomansley house.

A winter visitor of the thrush family. Often seen in flocks feeding in the hawthorn hedges surrounding the Green. Has a distinctive cream stripe above the eye. 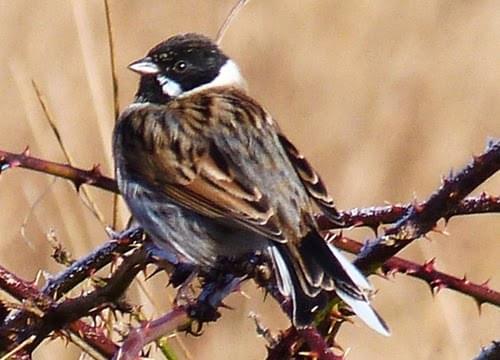 We are lucky enough to have 4 -5 pairs breeding on the Green each year. They can be seen on the rush in the wet part of the Green. The male (top photo) has a characteristic white collar around his neck, whilst the female (bottom photo) is much browner. They nest low down in the rushes, so it is important not to disturb them during the breeding season.

Another summer visitor, which has only been regularly recorded on the Green since 2020. It has a very distinctive scratchy song and if you are lucky enough to see one, it can be identified by its pale eye stripe. It breeds on the wetter part of the Green and surrounding land.

Every year a few snipe overwinter on the wetter part of the Green amongst the rushes. It is a secretive bird and very difficult to see unless it flies up.

One our favourite birds, with its characteristic spotty chest and beautiful melodic song. You can often hear one singing near the football field gate, so keep an eye (and ear) open for this lovely bird. 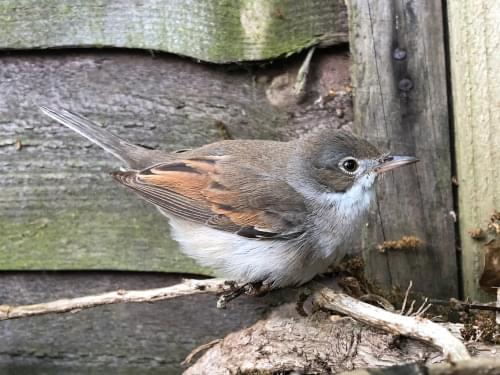 A summer visitor of the warbler family and is one of the easier warblers to identify by its characteristic white throat and call. Most years 3 - 4 pairs breed in the hedges around the wetter part of the Green.